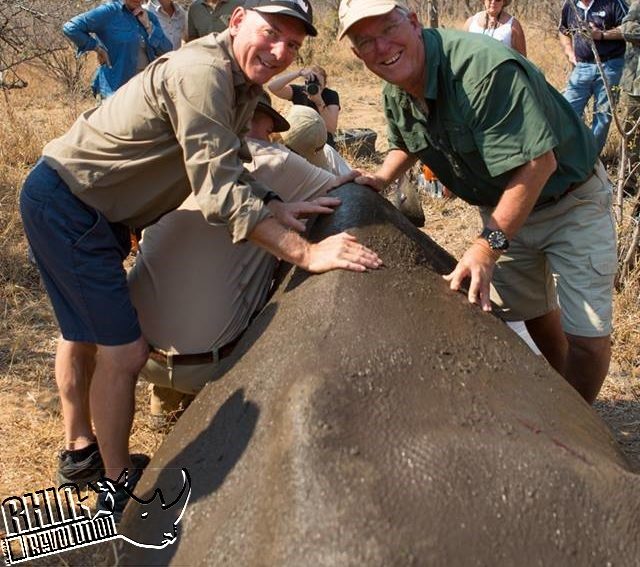 Rhino Revolution is involved in a black rhino breeding project.  A female rhino (on loan from the Pretoria Zoo) and a privately owned male rhino were released onto the Rietspruit Game Reserve.  The female gave birth to a male calf in May 2017 in the wild and he is monitored and seen on a regular basis.  The acquisition of a further female is progressing well and we are hoping to have this finalised shortly which will help accelerate the breeding program.  Apart from de-horning, security and monitoring, the animals are left to fend for themselves.

To ensure genetic diversity we will look to get involved in a bull exchange with one of the neighbouring reserves in the future to ensure the wild populations stay viable.

We are privileged to be contributing to the survival of this rare and iconic species.  All of our rhinos are dehorned and in this image you can see RR-UK trustee Glyn Abba along with the CEO of RR Phil Ovens at the dehorning of our male black rhino.

Black rhino mothers are extremely protective and secretive so we were thrilled when this mother came to introduce us to her calf!

We are delighted to announce that the female black rhino is quite far into her pregnancy (Jan 2020)! A pregnancy test was done when she was dehorned last year (2019). We monitor her well-being remotely and were lucky to capture her on one of the reserve’s camera traps! It is hard to judge exactly when she is likely to giver birth – their gestation period is 15-16 months.

Receive 10% off your qualifying purchases when you spend £25+. Applies to everything in the shop EXCEPT - Jewellery Dismiss