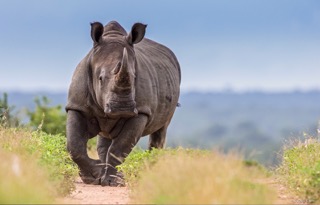 For 65 million years rhinos have roamed on our planet in various forms.  However, during our life time we have to continue to act to ensure their future.  This is the first of the “Big Five” that has reached this point – but it will not be the last.  The five main species (2 in Africa and 3 in Asia) of rhino are all endangered with South Africa being home to the vast majority of the remaining animals (mainly white rhinos).  South Africa and the Asian countries where these species reside have big problems relating to poaching.

The White Rhino is the second largest land mammal on our planet but incredibly many are unaware that the value of it’s horn, primarily in Asia, is driving it to extinction.  One rhino is poached in Africa every eight hours with the next generation going with them as unborn and helpless orphans are uncounted.  Without this keystone mega-herbivore many other species will be impacted.

It is not too late if collectively a decision is made that making room for the diversity of life on our planet is a priority.  We follow a three point directive of rescuing orphans (for release into the secure areas of the wild), protecting animals from poaching by all means possible and educating people from children upwards on practical ways to conserve our global inheritance.

We all need to consider if we will be passive about losing these animals forever on our watch.  Join RR-UK and we can ensure your meaningful involvement in saving this species.